Cameron started to attend one of our local Brick Clubs primarily because his mum, Marcia felt there was nothing available in Edinburgh to help him learn to communicate with other children.

Cameron was completely non-verbal until he was 3 years old. At age 6 he can now speak but not in full sentences, mostly with only 2 or 3 words together. The words he can say are hard for him to pronounce and he struggles to speak, therefore he will avoid speaking if possible unless asked a direct question.

The most challenging area for him and the missing part of his life from his parents’ perspective is that he cannot communicate with his peers. He is unable to communicate well enough or in ways in which they are familiar with therefore they don’t play and interact with him. This naturally caused heightened social isolation throughout all his time attending local nursery and now he experiences the same at primary school, which means he has struggled to develop effective social communication skills.

He has very limited interaction with his peers at school. They aren’t his ‘friends’ and he is acutely aware that he is not treated the same as everyone else. Can you imagine how this negatively impacts on his sense of identity and confidence? Confused and upset, the feelings of being different and constant exclusion is reinforced time and time again which discourages interaction. Cameron adopts self-preservation strategies like withdrawal of sound and *behaviour internalisation.

Mum felt she needed help to work on his speech production, pronunciation and his interaction skills with other children but hadn’t found anywhere for him to learn these skills. Because of the exclusion and learned responses to isolation and non-communication, he naturally tends to play to his own agenda and finds it hard to turn take and follow play with someone else. As he gets older and realises he is not able to engage in a two-way communication exchange, he chooses to avoid playing with other children. His family has noticed that he is now fully aware that other children do not understand him and they do not want to play in the way he likes to. This has led him to simply giving up. He is unable to articulate in words how he feels.

One thing we should be very aware of as parents, is that it is very typical of children who are excluded through lack of communication, to feel more comfortable with adults and navigate an adult world where at least they are offered potential interaction. Adults try, kids don’t! Adults are more likely to try to understand what he wants or is trying to say, kids are not.

Marcia expressed her sadness “Cameron gets so upset in that he will cry if I don’t have time to play with him because ultimately, I am his only friend. People don’t understand what it’s like for children who experience these difficulties. And as a parent it’s the most heart-breaking thing to watch your child so lonely with no friends, I feel so guilty and helpless. How can I make other children want to play with my child, to want to try to communicate with him? Their lives are so fast, Cameron doesn’t fit into it. He needs space and time and someone who has patience. Even other parents don’t understand. I tried to organise a party for his birthday and not one parent said their child to come. I was devastated. I hadn’t told Cameron I had planned a birthday party so that he wouldn’t get upset if no-one wanted to come. If there is no understanding from other parents, what hope is there that their children will want to make any effort?”

Marcia isn’t alone in her experiences. Many parents tell us of their worries around their child’s lack of friends or opportunities to socialise. This isn’t unique, it’s a typical scenario for all children who are excluded through their lack of language or communication skills.

Since starting Brick Club, Cameron’s life has started to change. 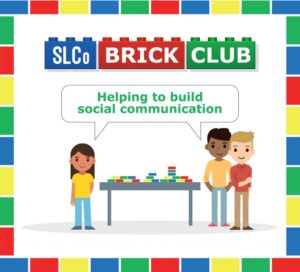 – Collaboration – being part of a group

– Problem-solving – meeting and dealing with problems as they occur

– Turn-taking – where we fit in

And of course the most important thing – making friends and having fun!

Marcia told us “Brick Club is something he looks forward to and is very excited to go. He talks about his friends there, while he hasn’t ever talked about friends.  Brick Club has a gentle, relaxed and nurturing environment where Cameron explored playing with someone – it started just one-to-one to one and built from there.”

She feels Brick Club is the perfect size, not too big or too busy, kids like Cameron don’t cope with large groups and lots of noise. **Sensory overload often results in frustration and makes a space uncomfortable for a child to stay in and remain calm.

Brick Club is predictable with set routines, familiar faces, and activities. Cameron knows the routine which really helps him integrate, as he is on the autistic spectrum. Since starting Brick Club, Marcia also noticed real improvements in his use of language – he uses more words and has started trying to play and share with other children again. She feels this has come at a good time for him as he knows that he will see his friends once a week and not to give up making friendships.

He is now making significant progress and learning the key skills he needs to be able to positively interact with others; these are evident from the staff observations and very importantly at home.  Developing skills that then start to become embedded and used across all environments is a sure sign of success. Marcia told us “.. he has massively improved his relationship with his brother and for the first time his brother, who’s a bit older, feels he can now play Lego with him, even if it is only for a short period of time. There’s not so much loud screaming and fighting and Cameron going off crying because his brother isn’t playing the way he wants to. It’s really reduced the meltdowns and the stress levels at home are more manageable. My family is calmer. Cameron is happier.”

Marcia feels that as a family they are hopeful they have found a positive support for their son and by continuing with Brick Club there will be further progress made on his social skills, speech and general interaction with other children.

She recognises the importance of attending Brick Club as she believes the programme will certainly help him throughout his life and he will continue to learn and develop skills that are essential for school and education.

“I do worry for his future, the educational psychologist told me his life will always be affected. And as he grows up, how will he cope with the big wide world outside. I know that that he has friends and will become more confident with time, this club has helped him transition from a very unhappy boy to a happy boy. Coming to club one day a week has made a massive difference to Cameron and to our family, it’s been the best thing for his future and his mental health.”

**Sensory processing issues are difficulties with organising and responding to information that comes in through the senses. Kids may be oversensitive to sensory input, undersensitive, or both.

What are sensory processing issues? The term refers to trouble managing information that comes in through the senses. These issues, sometimes called sensory processing disorder or sensory integration disorder, can have a big impact on learning and on everyday life.

If you need to know more about your child’s speech, language or communication, visit the website or contact our Helpline on 01382 250060

This site uses Akismet to reduce spam. Learn how your comment data is processed.